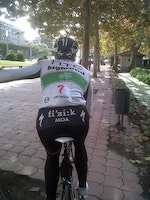 So, six days have passed since my butchery session and I’m still feeling pretty battered. I had a long and slightly eventful trip home on the Friday and after hobbling round airports and squeezing onto planes I was greeted at the airport by my friend, who had come to meet but not, as planned, collect me.

As Sod’s Law has it, her car had blown up. So another hour passed by while we waited for someone to pick us up and get us home! As you can imagine, by this point my leg was looking more like a sumo wrestler’s than a bike rider’s and by the time I got home I was half dead. After just one day at home I was back in the airport on the way to Girona, Spain for some so-called training. This was arranged a long time ago before my surgery was booked, hence the clash.

Anyway, I had nothing to do in Belgium and my girlfriend wanted to train, so what the hell… I may as well be sat in sunny Spain doing nothing as sat in the rain in Belgium doing nothing, hey? After a day of sitting around I cracked and went out on the bike. Bad idea! A grand old total of 54 minutes’ riding and I was on my knees and then my back, feeling like death, collapsed on the sofa.

As you can maybe see in the photo my left hip and leg is looking more like a hippo’s! Good job, Matt! Sadly, patience isn’t my strong point. So think of me, sat in the beautiful square in Girona, drinking coffee on my own and feeling sorry for myself while everybody else is out in the sun riding their bikes! Hopefully, by the time I next write I’ll be feeling a little better and at least able to ride my bike!

Matt's fond memories of sunny Girona are about to fade

Matt's fond memories of sunny Girona are about to fade

Matt gets rid of some excess weight

Looking back at 2011: Matt Brammeier writes for RCUK

Looking back at 2011: Matt Brammeier writes for RCUK