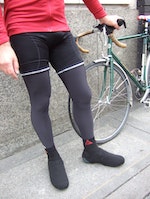 Apparently, road cycling has been codified under rules drawn up by a shadowy organisation known as the Velominati.  A brief perusal of said rules reveals them to convey a distinctly Stateside flavour, larded as they are with terms such as “douchebag” and “jackass”. That’s no bad thing; cyclists across the Pond are nothing if not enthusiastic and there’s some good stuff in there, such as rule #60, which hits the nail very firmly on the head, and the instruction in rule #45 that a 5mm spacer must always be fitted above a threadless stem. That said, the companion assertion that 20mm of “stack” is the maximum permissible and that zero stack is the ideal is questionable, to say the least… I’ll go to 30mm.

Of course, the fact is that rules are there to be broken, especially prescriptive rules such as those posted by the Ignominati or OREC. At any rate, most road cyclists seem to do with airy indifference. There are rules, that said, that are absolute, and they are those one applies to one’s own affairs. I have plenty, some of which can prove inconvenient while others are simply the imposition of the lessons of a cycling life applied to everyday riding.

Examples of the latter: always run the front tyre 5 – 10psi softer than the rear; never set out on a ride without the means to repair at least two flats – and that includes tyre levers; wear an undervest even in the hottest weather – and so on. The rule that says tyres must be fitted in matching pairs can prove irksome but is only marginally inconvenient compared to the manifold benefits that stem from following it… While the rule that says I won’t ride a bike with a left-hand front brake has once or twice been broken but on one such occasion nearly led to disaster.

For all this, rules that govern what to wear are, as the regulators listed above recognise, by far the most fun both to follow and to flout. One such – one I won’t flout – came into play last week with the sudden onset of weather too cold for mere knee-warmers. Obliged to cover the shanks, I opted for full-length leg warmers, which in turn obliged me to hunt around for a pair of black oversocks. Thing is, I could no more wear white oversocks with full-length leg covering than wear black ones with the skin of the lower leg showing. No doubt somebody will point out the mismatch between the shade of the warmers, the shorts and the oversocks; just think of it as the sort of minor oversight of which we are all guilty from time to time.

Belgian special forces operatives get their hands on the Quickstep boys

In the bleak mid winter...

Five reasons winter was made for cyclists

In the bleak mid winter...