Spanish company Orbea began life way back in 1840 in the Basque town of Eibar as a family business operating in the weapons industry and machine-tool sector. It wasn’t until the 1920s that if first began making bicycles from its base in nearby Mallabia. In the late 1960s it grew into a cooperative that was part of the Mondragon Corporation, and it is now the country’s largest bike maker, with many models still being made in Mallabia.

The company began to be associated with competitive cycling in the 1970s with the advent of the first Orbea road cycling and MTB teams. They were soon celebrating notable performances like Pedro Delgado’s victory in the 1985 Vuelta a España, and Pello Ruiz Cabestany’s win in the Tour of the Basque Country in the same year.

In recent years, Orbea has become closely associated with the Basque Euskaltel-Euskadi team – in 2013, the team’s official bike was the Orbea Orca Gdi2. Ironically it was the formation of the state-funded team in 1994 that was the death knell for Orbea’s own elite squad – Orbea (currently styled ‘Euskadi’) is now content to be one of the Continental Teams on the UCI Europe Tour, functioning as a feeder team for Euskaltel-Euskadi.

The company’s bikes were used in a number of notable performances at the 2008 Beijing Olympics, including Samuel Sánchez’s road race gold, and Julien Absalon’s gold and Jean-Christophe Péraud’s silver in cross-country mountain biking. Triathlete Craig Alexander rode an Orbea Ordu to victory in the 2008 and 2009 Ironman World Triathlon Championships. 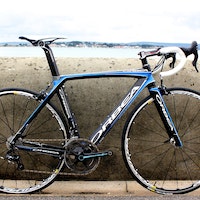 Unashamed race bike with comprehensive spec; aggressive position may not suit all
7 years ago | by Peter Lovell