Ridley unveiled the Dean FAST ahead of the Tour de France and the Belgian brand’s new machine will make its competitive debut in today’s TTT with the Lotto-Belisol team – including general classification contender Jurgen van den Broeck.

Ridley’s Jochen Bessemans told RoadCyclingUK the Dean FAST has been four years in the making and only just made it to the Tour de France, having been given the seal of approval by the UCI on June 26 – three days before the Grand Depart in Corsica.

We ran you through the Dean FAST’s key technical innovations when it was officially unveiled in Porto-Vecchio last week – but here’s a quick recap before we take a closer look at van den Broeck’s bike.

The FAST concept is essentially made up of three key technologies: the F-Brake, F-Splitfork and F-Surface.

When the integrated F-Brake was introduced on the Noah FAST, now Andre Greipel’s machine of choice, ahead of the 2011 Tour de France, Ridley kick-started a trend which continues to dominate bicycle design three years later, up to the launch of the LOOK AeroLight last week.

The F-Brake essentially integrates the front brake into the fork, however, Ridley have updated the design for the Dean FAST. One of the main criticisms of the original F-Brake was the obtrusive cabling, but the updated technology uses a centre-pull system which feeds all cables through the stem and headtube. It’s a much sleeker design and one which will work its way onto the Noah FAST.

Meanwhile, the F-Splitfork is, well, a split fork which is designed to minimise air turbulence caused by the front wheel. Ridley have enlarged the F-Splitfork at the top of the wheel to increase its effectiveness on the Dean FAST.

F-Surface, on the other hand, started life as textured plastic strips applied to strategic locations of the Noah FAST, with the idea that they let air travel smoothly around the frame instead of detaching and creating drag. However, on the Dean FAST, F-Surface is integrated on the frame itself via the mould.

FAST aside, the overhauled Dean also has a neatly integrated cockpit, with a toptube which sits flush with the stem, and the front end will be integrated further when Ridley unveil a new handlebar/stem combination from componentry arm 4ZA. For now, van den Broeck runs a team issue Deda setup.

Speaking of which, let’s cast our eye over some of the details on the Belgian’s machine. 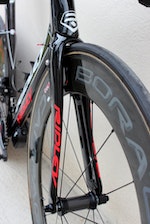 The seatstays on the Ridley Dean FAST are deliberately flared to accommodate wider tyres. Also note the Kammtail profile of the seattube and seatpost

No mistaking who these ‘bars belong to. Lotto-Belisol use Campagnolo’s EPS shifters

If the front of van den Broeck’s saddle looks like its been hacked off, that’s because it has. The UCI have strict rules about saddle position on time trial bikes and this is one way of getting past the red tape