The Cervélo S5VWD is the Canadian firm’s flagship aero bike and this machine belongs to Garmin-Sharp fast man Robbie Hunter.

The S5 was unveiled ahead of the 2011 Tour de France in three versions: the S5, the S5 Team and the top-of-the-range S5VWD. Gerard Vroomen and Phil White are co-founders of Cervélo brand and VWD stands for Vroomen White Design. While the S5VWD is the same shape as the standard S5, Cervélo have used a different carbon layup to drop the claimed weight to 990g for a size 54cm frame.

The S5 gets its name from the five key aerodynamic features incorporated in the frame design: the shielding seatstays which hide the rear brake from the wind, the teardrop downtube which flattens to integrate a water bottle, the dropped downtube which runs extremely close to the front tyre, the aero-shaped BBright bottom bracket shell and the extended seattube cutout which is said to smooth airflow from the frame to rear wheel.

Cervélo have been tinkering with aerodynamics for nearly two decades. They say the S5VWD is the result of everything they’ve learnt over that period and it certainly looks fast…

Hunter is Tyler Farrar’s leadout man. Like the American sprinter, Hunter has one Tour de France stage win to his name and when he earned that victory in 2007 he became the first South African to win a stage of the race 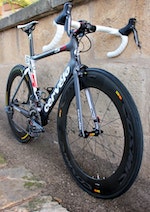 The S5’s headtube has an hourglass profile which minimises the frontal area exposed to the wind. The headtube houses a standard 1-1/8in steerer, unlike the vast majority of high-end frames, which now have a tapered headtube to increase front-end stiffness

The Cervélo FK26 UL fork is neatly integrated with the headtube, while the downtube sits just millimetres away from the front wheel – both features designed to smooth airflow. Those wheels are Mavic’s super-deep Cosmic Carbone 80 hoops but Shimano Ultegra brakes on a WorldTour bike? More on that in a minute…

While most teams are sponsored by a component manufacturer, Garmin-Sharp choose to buy their kit (albeit at very preferential rates) and this allows them to mix-and-match components as they please, rather than be tied down to one brand. As a result, Hunter uses non-round Rotor Q-Rings paired with the Spanish firm’s 3D+ cranks 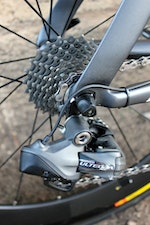 Garmin-Sharp’s mechanics told us that Hunter normally prefers to ride his Cervélo R5, so his S5VWD is equipped with the cheaper Shimano Ultegra Di2 groupset until the new 11-speed Shimano Dura-Ace Di2 setup arrives

Needless to say, all Garmin-Sharp riders track their data using Garmin computers, with Hunter’s machine paired with an Edge 500

A Rotor Chain Catcher helps keep the chain in place, while you can also just about see one of Hunter’s Arundel Mandible bottle cages

Ciolek wins ahead of Sagan in snow-disrupted epic

Dressing for comfort - whatever the weather

Ciolek wins ahead of Sagan in snow-disrupted epic

Dressing for comfort - whatever the weather