Jurgen Van den Broeck has just completed his final pre-season training camp in Benicassim, Spain – and this, the Ridley Helium SL, is the bike he will use for the forthcoming season.

Lotto-Belisol riders have three different bikes from Belgian brand Ridley to choose from – the super-light Helium SL, the aero Noah FAST and the Classics-specific Fenix, and we’ll be showing you all three having spent the week with the team in Spain.

But Van den Broeck, fourth in the Tour de France in 2010 and 2012, and aiming for a spot on the podium in 2013, will only use the Helium SL throughout the season, regardless of the race.

The Helium has long featured in Ridley’s range but went on a diet last year, and the Helium SL (that stands from Super Light, of course) is the result. Lotto-Belisol got hold of it just before the Tour de France, while we first gave you a glimpse at Eurobike.

The frame previously weighed in the region of 950g but that has dropped to a paltry 780g (claimed weight) for a size medium – that puts it among the lightest frames available – while the new Helium Ultralight fork weighs a claimed 310g.

We logged some miles on a non-team issue Helium SL while in Spain and will report back with our thoughts but, for now, let’s take a closer look at Van den Broeck’s machine.

One of the key differences between the old Helium and the new Helium SL is the switch from an integrated seat post to a standard, 27.2mm seatpost, which saves weight, increases comfort and improves re-sale value, according to Ridley.

Ridley also switched to a BB30 PressFit bottom bracket, again to save weight thanks to the full carbon construction. The frame is made from a blend of 60, 40 and 30-Ton carbon fibre, which Ridley say results in a frame which is super-light without sacrificing stiffness.

The Helium SL tube profiles make for an understated appearance, particularly compared to the streamlined Noah FAST and oversized Fenix.

Super-skinny seat stays are all the rage and the Helium SL is no different, with the idea that the thin and flattened profile will help build in some comfort to the rear end. The Helium SL also gained stainless steel plates on the carbon fibre dropouts to make for easier wheel changes and improved durability, albeit at a minor weight penalty. 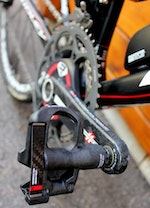 Lotto-Belisol are sponsored by LOOK and Van den Broeck uses the company’s Keo Blade Carbon pedals. Otherwise, the machine is specced with Campagnolo Record EPS. Lotto-Belisol say there is not enough performance gain to be had from using Super Record EPS to have initially justified the extra cost but are expecting to upgrade some machines ahead of the Tour de France. That, and a new ultra-light paint job, should shave about 200g from the Helium SL’s overall weight.

Van den Broeck’s bike was dressed in its training camp outfit for my visit, rather than its Sunday best, with Campagnolo Eurus aluminium clincher wheels and Continent Grand Prix 24mm tyres.

Once the racing seasons begins, Lotto-Belisol mechanic Frederik Moons told us Van den Broeck is likely to opt for Campagnolo Hyperon Ultra Two wheels: super-light, low-profile, carbon fibre (including the hub) climbing wheels with a claimed weight of 1,231g, which Van den Broeck used for every stage of last year’s Tour de France, regardless of the terrain. They’ll be fitted with Continental Competition tubs.

A slammed stem, whereby it sits directly on top of the headtube, is a hallmark of a pro bike but Van den Broeck has to use one spacer due to reduced reach and flexibility as the result of numerous broken collarbones. 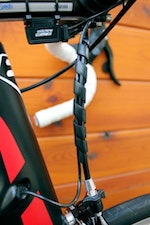 Cable routing is internal on the Helium SL and is compatible with both electronic and mechanical groupsets. Check out the homemade solution here to keep the brake and gear cables neat and tidy.

Steel in the pro peloton?

Steel in the pro peloton?