With the high mountain stages about to be reached, the Giro is set to reach new levels of drama in its second week.

The brutal demands placed upon the riders by the punishing gradients of the Dolomites, and by a trip across the French border to the Alps, are made manifest in this infographic from the Giro’s nutrition partner, Multipower Sportsfood, reproduced in a larger form at the foot of this article.

Temperatures that can fall at the rate of one degree centigrade with every 100 metres climbed, descents at speeds nudging triple figures, often conducted in high-risk tuck positions, make the mountains an unmistakable challenge. Those of the Giro have a romance and history to rival the Tour de France.

Much of the challenge of sustained climbing to peaks well in excess of 2,000 metres comes from the sheer duration and the debilitating effects of sustained effort. Mark Cavendish will churn out an estimated peak power of 1,500 watts as he sprints for the line, but is unlikely to do for longer than 500 metres.

On climbs of up to 20km, the wattage will be much lower, between 300 and 500 watts, but still far in excess of that produced by an amateur cyclist riding on similar inclines.

Gradient, however, is just one factor playing on the rider. Altitude makes its own demands, increasing the rate of fluid loss through sweating, reducing maximum aerobic output by as much as 40 per cent, and at heights above 2,400 metres, affording the potential for altitude sickness.

Altitude’s capacity to accelerate fluid loss means the riders will be consuming as much as they can before the stage begins, typically between three and four litres. They will, of course, continue to drink throughout the stage, as many as four to five litres, before consuming perhaps as much again when the stage is complete. The water bottles contain variously a mix of water and electrolyte, and water and carb-based supplement, also with electrolyte.

Bottle carrying duties are an essential part of the role of domestique in a bid to stave off the potentially leathal effects of dehydration and heat exhaustion. On the narrowest roads, a neutral motorbike takes over water carrying duties.

Just 43 riders completed stage 18 of the 1956 edition, with temperatures said to have fallen to minus ten degrees. Surely only such conditions could convince the race leader to abandon hopes of riches and glory: Pasquale Fornara swapped a chance of both for the relative warmth of a farm house. Charly Gaul, the ‘Angel of the Mountains’ claimed the stage victory, but it was hard won – legend has it his clothes had to be cut from him.

The 1987 Giro won by Stephen Roche saw the Irishman defy team orders to claim a famous overall victory, the first stage to a Triple Crown of Giro, Tour and world road race championship achieved in a single season to match the achievement of Eddy Merckx. Roche dueled with team-mate and home nation favoruite, Roberto Visentini, making his decisive move on the stage 15 descent of the Forcella di Monte Rest. Things turned ugly thereafter, with Roche forced to rely on team-mates Eddy Schepers and Eric Breukink to protect from assaults from the tifosi and his own team-mates. 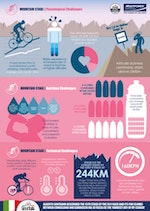 Fine tuning your performance for the big day