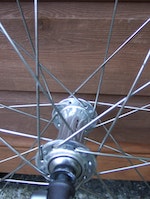 Three-cross tangent lacing at the hub

Spoke lacing pattern is perhaps the most fundamental choice made by the cycle wheel builder; for sure it’s the one that will be noticeable (flashy components notwithstanding) once the wheel is built. It can be the simplest of choices – opting for the classic, bog-standard three-cross all-round – or the toughest. After all, it affects every aspect of the finished wheel’s performance from weight to longevity.

Effectively, and ignoring weird stuff of the “snowflake” sort, lacing patterns boil down to a choice of three: radial, tangential and crow’s foot, which mixes radial and tangent spokes in groups of three. Each side of a wheel can be laced in any of these patterns; generally, the front wheel of a rim brake-equipped bike will be the same on both sides, as will a hand-built rear for reasons of convenience.

Radial spoking offers one clear advantage: it saves weight, since the spokes are as short as possible. It is often supposed that a tangent spoked front wheel is somehow more comfortable than one with the same number of radial spokes; if there is a difference, due perhaps to the extra length of the tangent spokes or to flex allowed by the inevitable distortion of interlaced spokes, it is hard to detect. A radially-spoke wheel is laterally stiff since the load path runs directly along the hub centre line.

Radial spokes are slightly more susceptible than tangential to slackening if the spokes are under-tensioned; a tangent spoke leaves the eyelet at a slight angle, which helps to bind the nipple in the rim, reducing any tendency to turn should the spoke lose tension as it goes over a bump. Except where “spoke freeze” threadlocking compound or Nyloc-style nipples are used, a nipple is held secure by friction between it and the rim eyelet. A spoke stretches – lengthens – as it is tightened by as much as 1.5mm depending on final tension. When the wheel is ridden over a bump, the rim is deflected inwards at that point allowing the nearest spoke to contract. Should it return to its normal length, the nipple will no longer be held against the eyelet by tension and is free to turn – which it will do. Note that it won’t get tighter… So a wheel with light spoke tension, even if true when built, is likely to perform poorly and quickly lose spoke tension when ridden over rough terrain. A tangent spoked wheel is less susceptible for the same spoke tension.

Note that some hubs must not be built with radial spokes. The direction of their pull can rip the flange away from the hub like a postage stamp from its sheet. Check with the hub manufacturer if unsure.

Crow’s foot lacing enjoyed some popularity decades ago but went out of favour until recently resurrected in slightly modified form by DT Swiss with the TriCon wheelset. One radial spoke sits between two crossing it in opposite directions at a tangent. It is claimed to offer the benefits of both radial and tangent patterns and requires a rim and hub with drillings in multiples of six: 18; 24; 36… unless you are very clever, in which case you can make 32 work.

Given its proven suitability for most applications, three-cross is the default option. Each spoke crosses three others between the spoke head and nipple on its own side of the wheel. All the spokes in a three-cross wheel are tangential. This is highly important for the back wheel, which relies on having at least some tangential spokes to transmit drive torque from the hub to the rim. On the front wheel, it does another job by sending the spokes into the rim at a slight angle.

There are alternatives to three-cross for tangential lacing. There is generally little point to a one-cross build, which is heavier than radial at the front but with inferior power transmission to when the spokes cross more often.

Two-cross, however, is worth considering for specific purposes. The most obvious is when building with a very large flange diameter. Three-cross may lead to the spokes reaching the rim at an angle sharp enough to put a distinct bend in the spoke where it is not desirable. Going to two-cross will reduce this angle.

The eagle-eyed will notice that the rear wheel of my Roberts 3-Speed is laced two-cross in the picture. This is because the correct spoke length for three-cross was not available at the time of the build. The wheel as shown proved unsatisfactory, breaking a spoke after some 2,000 miles, and has since been rebuilt with spokes crossing three. This was probably due to flex caused by the hub moving relative to the rim under power as a result of the less-than-tangential angle of the spokes with the hub flange.

If building with 24 spokes, there aren’t enough of them to make three-cross the best choice; two will work nicely.

Four-cross works best on a mid-sized flange, where there is enough room for spokes to miss the heads of those they pass. It should give a supple ride with excellent power transfer.

Anyway, this is going to be a straightforward build of a pair of bog-standard all-rounder winter wheels, so three-cross all round is the lacing pattern of choice.

How to "bond" with your new leather saddle

How to "bond" with your new leather saddle

More from the RCUK archives...

You need an event strategy to ensure you perform to your best on the day. Here’s how to plan one