Given its natural assets, it’s surprising that Swiss peaks do not hold the ‘must ride’ appeal of their French and Italian neighbours. The Tour de Suisse occupies a position on the calendar of cycling’s elite UCI WorldTour, but while acknowledged as brutally hard, fails to capture the imagination in the manner of other events. That the principal contenders for this year’s Tour de France selected the Criterium du Dauphiné for their final, pre-Tour preparations perhaps speaks volumes. The absence of marquee climbs should not deter the serious amateur from experiencing the Swiss Alps, however.

Davos Klosters has more than its share of brutal ascents and beautiful peaks. Davos is now known best as host to the World Economic Forum, but its earliest clientele were convalescents. Nearby Klosters has long been associated with the British monarchy, but Hollywood royalty first claimed the resort as its own in the 1930s, when Greta Garbo headed a list of glamorous refugees from Tinseltown seeking privacy and inspiration. (The view from the dining car on a slow train from Zurich offers the modern traveller a window – figurative and literal – on Garbo’s world. Courses come and go with peerless views of lakes and mountains. Highly recommended).

The Albula Pass, tackled from the west, offers nearly 26km of unbroken climbing. Its gradients range from challenging to cruel, and its scenic appeal from diverting to mesmerising

It is the roads, however, that will hold the greatest appeal for the cyclist. Fast, smooth, and flowing, they are far removed from the grippy and cratered surfaces of the United Kingdom. Many of those from Davos lead upwards, into the mountains and to scenery of dazzling beauty. RoadCyclingUK sampled some of them on a preview ride for the Etape Suisse, a new event to be held this September and based on a concept of ‘sportive hospitality’ wherein as much entertainment is laid on for non-cycling companions as the event’s participants – everything from spa treatments to electric bikes.

We rode a variation of the aptly-named Two Pass Challenge, a 120km loop from Davos that included 2,700m of climbing, most of it on the 25.7km ascent of the Albula Pass and later on a crippling, 15.3km grovel to the summit of the Flüela Pass. Participants tackling the inaugural event next month will have the choice of a 114km ride from Davos to St Moritz with the same passes, or the One Pass Tour Challenge, a still-challenging 72.8km ride with 1480m of climbing tempered by a highly enjoyable 1367m of descent.

Our ride began at the Hotel Grischa, a quietly luxurious establishment in downtown Davos, directly opposite the station and so conveniently located for the cyclist travelling with bike. Davos does not lack hotels, ranging from the affordable to the spectacular (the 210-room Intercontinental, a striking, gold edifice perched above the town is the newest), but the Grischa is a sensible choice for the rider seeking serious comfort to numb the pain of a day in the mountains. Owner, Maurice Parree, is a cyclist and a useful source to those about to ride his local loops for the first time. His staff could scarcely have been more welcoming to the lycra-clad guests that thronged a cavernous lobby which became a deliciously cool refuge from the blazing heat with the sun at its zenith on our return. 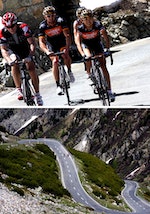 Rolling out west from the Grischa, our ride took us from Davos along quiet back roads and onto a gentle descent to the Landwasser vehicular tunnel. Cold, noisy, and poorly lit, it is an inhospitable environment for the cyclist, and was a relief to leave behind, even with an escort front and rear from the event organisers. Cyclists tackling the Etape Suisse in September are likely to enjoy the same protection, but riders visiting Davos for solo missions are advised to proceed with caution, and with lights.

Riders from the Wiggle Honda team, training in the Swiss Alps, joined us for the preview ride. It is something to ride with a professional, even when the suspicion that they are barely trying becomes inescapable. Mayuko Hagiwara is a multiple Japanese road race and time trial champion, a star in her home country, and likely to be a valuable asset to a team with a Japanese sponsor. She has forsaken the comforts of home to base herself in Belgium and become another grafting pro; one with cultural and linguistic hurdles to overcome, as well as sporting. She is reserved, polite, and genuinely surprised by the profile of women’s racing in the UK. Her progress alongside me appears effortless as the road rises, and we have yet to reach the first serious climb of the day.

With the tunnel behind us, and an undulating road into postcard scenery ahead, things looked up. And up. The Albula Pass, tackled from the west, offers nearly 26km of unbroken climbing. Its gradients range from challenging to cruel, and its scenic appeal from diverting to mesmerizing. For the most part, the road surface is wildly superior to any in the UK, but the tarmac ended abruptly for a short secteur, forcing us onto stones before resuming as if nothing had happened. A level crossing provided another unexpected encounter, but there was no passing train to offer the solace of an enforced break.

Closer to the summit, the road opens into a series of seemingly endless straights, terminating in tight corners, whose sole purpose in life it seems is to conceal from the unwitting cyclist another unending section of straight road. A small restaurant is visible from some distance at the end of the last of these sections, providing a focal point on which to expend any last remaining reserves of energy. Refilling bidons at the sinks of restaurant toilets in the UK might be an unappealing prospect, but here the water is harvested from snow melt and purer than anything bought in a bottle back home.

The  few miles of flat road at the plateau pass easily, before dropping into a technical descent into La Punt-Chamues that ends too quickly for tired legs. The valley floor is studded with small settlements, some with houses centuries old and built with a stoutness to survive the snow-ravaged winters. Navigating to Engadin and lunch at In Lain proved as simple as keeping the River Inn to our right.

The Etape Suisse is a new event intended to offer a cycling holiday to be enjoyed by cyclists and non-cyclists alike, and will be held from September 5 to September 8, 2014. Electric bikes, “Après Cycle” entertainment, spa treatments, a gala dinner with charity auction to raise funds for Laureus Sport Foundation, and a chance to ride MY2015 BMC bikes feature in a series of “active” and “relaxation” options, which start from £1400 per rider, and £1250 per non-rider.

RCUK stayed at the Hotel Grischa, a four-star hotel in the centre of Davos. Double rooms start at CHF 210. Rooms at the five star, Intercontinental hotel start at CHF 250.

We flew SWISS from London City to Zurich. SWISS offers up to 19 daily flights from London Heathrow, London City, Birmingham and Manchester to Zurich. Fares start from £147* return, including all airport taxes, one piece hold luggage and free ski carriage. (*Please note this is a leading fare and is subject to change, availability and may not be available on all flights. Terms and conditions apply.) For reservations call 0845 6010956 or visit: www.swiss.com.

A return rail ticket from Zurich to Davos costs from CHF 29. Combined rail and bus passes for periods suitable for holidays are also available. Visit SBB.CH.

Dessert was a generous helping of more climbing, this time in the form of the Flüela Pass which, despite being some 8km shorter, made the Albula feel like a mere hors d’oeuvre. We had been warned of severity in the first 3km before more gentle gradients, but the following 10 kilometres were equally hard. The Albula allows the rider to build a rhythm, but the Flüela is not so generous.

It is unremittingly difficult from start to finish and withholds its most demanding section until last. The road opens on the approach to the summit but the absence of hairpins does not indicate an easy ride to the top. The faintly surreal sight of a man on a mountain bike bearing a flag proclaiming ‘Romania says no to fracking’ provided a brief distraction from the pain. Further diversion arrived in the form of a frozen lake – an opaque sliver of turquoise (algae in the melt water, apparently) – at the side of a road that had at last leveled.

From the summit, unsurprisingly, the only way is down, and the descent to Davos from the Flüela’s plateau is exhilarating. Look up from the bars and it’s possible to watch the fastest descenders in the group plummet to the valley floor. The opening section is technical, and delivered the anticipated challenge of negotiating hairpin bends on roads open to traffic.

The road soon straightens, however, and from here the speed of descent is determined only by trust in your machinery. Intermittent and precautionary squeezes of the brake levers will regulate speed, but are unnecessary: there are few hazards once the hairpins are left behind. Be aware, however, of motorcyclists, who swarmed on the Flüela like angry bees on the day of our ascent.

There can be few more attractive places to ride a bike than Switzerland. The scenery is superior even to the French Alps, its mountain passes seemingly on a greater scale, and its roads perhaps the smoothest in Europe. Temperatures in the mid-20 degrees Celsius greeted our arrival in June, making a reality of the dream-like experience of slathering on sun cream at the summit of a snow-capped peak. In selecting a route that takes in the astonishing landscapes that surround Davos, the organisers of the Etape Suisse have guaranteed its participants a parcours that is in equal measure demanding and inspiring.