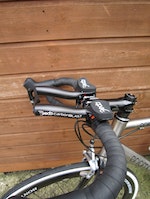 So new is Deda’s Carbon Blast min-aerobar that there’s next to no information about it on the company’s website. But, with a sample in our grubby hands, we can allow our imagination to wander…

At the front of the extensions lies an ITU standard front link bridge; what this means is that the Carbon Blast is suitable for use in triathlons where “drafting” – or sitting on a wheel – is permitted. Seems that having anything extending beyond the brake levers is considered hazardous, which explains their stumpy proportions. The bridge ensures that the extensions don’t conclude as a small-diameter bar but as a wide plastic strip that may well be less prone to cause injury. Although bar end plugs do the job well enough on the road.

For most RCUK readers, the bars’ suitability for draft-legal triathlons will be of less interest than their suitability for – what? Not road racing, where they are not allowed. Sportives? Despite their unsuitability for bunch riding, full-on elbow-rest tribars are  increasingly to be seen in British events, so maybe. Touring? They’ll get in the way of a handlebar bag – or front light. Same goes for commuting, in winter at least.

Maybe their true vocation will become clearer out on the road. They are almost a doddle to fit to the bulge of dropped handlebars, only the need to keep the loose-fitting threaded barrels from falling out incurring any irritation. Brake and gear cables may need moving to clear the oversized clamp brackets.

The design incorporates rest plates. Given the 180mm length of the extensions, these are better described as wrist rests than arm rests, but in any case they are topped with nice, soft foam rubber pads for comfort. The extensions themselves bear a satin finish over unidirectional carbon fibre and are comfortable to hold.

So, first long stretch of road; down onto the extensions we go. A simultaneous comparison between arms in the two positions says the trunk angle is the same using either the extensions or the “drops”. What isn’t the same is the degree of control, the Blast bars offering less leverage. There is a fair bit of instability to the steering when resting on them, although this could be expected to diminish with experience and practice.

As stated, the length of the extensions means that the wrists – or at least the forward section of the forearms – rest on the pads. This puts a high loading on the triceps muscle, which has to counter the tendency of the elbow to drop under body weight. Treading hard on the pedals eases this, as does pulling upwards with the hands; in any case, the bars are tolerable rather than relaxing to use.

What is impressive is the reduction in air drag compared with riding on the drops. With the forearms placed horizontal and, as are the upper arms, brought inside the body’s frontal area, the rider goes appreciably faster for the same effort. If not as biomechanically effective as full aerobars, which by supporting the rear of the forearms and taking the weight of the upper body with minimal muscular effort permit a more forward riding position, the Blast bars are reasonable performers through the air.

For anyone thinking of taking up time trialling but not wanting to shell out on a dedicated TT bike – at least in the short term – Deda’s Blast Carbon mini aerobars fitted to a road bike would make a credible alternative – for shorter events at least.

That’s what we are going to try out; report in due course

See more or add your review on MporaGear

Cavendish abandons after being dropped on Le Mànie

Cavendish abandons after being dropped on Le Mànie

IG Nocturne to return to London on Saturday June 9

IG Nocturne to return to London on Saturday June 9