In the previous article I outlined how a series of  ‘rules’ called the principles of conditioning can be applied to your training in order to provide structure and a clear pathway to achieving the adaptations that are central to improved performance. The next two principles of conditioning are very important in developing your training as they dictate the extent to which you improve and continue to improve. All too often I see riders who begin training for an event, show good early improvements and then quickly hit a plateau or dead end, where they don’t improve any further. It can often get worse as in trying to break through this false ‘ceiling’ on their performance, they end up actually going backwards and loosing the initial fitness gains.

This is most often because they don’t have an understanding of, or in many cases don’t adhere to, the principles of conditioning which are ‘Overload’ and ‘Progression’. At whatever level of ability you ride or race, these are fundamental to your improvement. In plain English, it’s a simple case of doing some training, seeing improvements and doing a bit more and a bit harder training in order to keep getting better. Nothing could be simpler or more obvious, yet you’d be amazed at how many riders find these simple rules difficult to follow or refuse to implement and end up wasting a lot of training time.

So let’s have a look at these two all-important principles in more detail.

In order to get stronger the mind and body needs to be subjected to a greater training load than that to which it is accustomed. This is quite simply a case of increasing the training load, so let’s start with a good understanding of what the training load actually is. 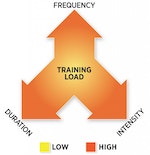 Look at our diagram and you can see that your training load is a combination of three factors:

1 : Frequency – how often you train

2: Duration –  how long you train for

3: Intensity –  how hard you train

Bearing this in mind, we can see that overloading your training can be achieved by introducing more work in any of these areas, thereby increasing the training load. And this is where many riders get things wrong. The two most common mistakes are firstly, in not overloading, or reaching a point in your training where you simply do the same things week in week out with diminishing returns

The other mistake is too much overload. This is quite common with riders who see some initial training adaptations and, for want of a better description, get a little big carried away, throwing everything into the mix too quickly, moving away from the yellow areas in the diagram into the red in all three areas at the same time. They feel good from positive endorphins flying around from their increased fitness so they train more often, for longer and start riding harder… all at the same time. This almost universally results in premature fatigue and any training adaptations will be unsustainable, leading to a training plateau, de-motivation and, at worst, overtraining.

So your training load needs to be carefully managed. Outside influences need to be considered, such as how much stress you are under from lifestyle issues such as work and family commitments. Are you undertaking any other training such as a strength programme, or competing in any other sports? And what is your current level of fitness? All of these things can greatly influence the training load. You also need to consider the training load in terms of individual training sessions and the effect over a period of time when undertaking a training ‘programme’ of repeated training sessions performed weekly. Individual sessions are a product of intensity + duration whereas a series of sessions is a product of both these elements plus the third – frequency.

Achieving the correct balance in your training load is best achieved by slight increases (called progressions, which we look at below) in each of the three areas, each targeted separately while continuing a ‘maintenance’ session in the other areas so as to avoid the reversibility of loosing training adaptations achieved in these other areas. For example, if you’ve built up a good endurance base with high duration rides and are now increasing intensity because you want to do some road racing early season, you’d keep in the occasional long ride to maintain the endurance adaptations you’ve achieved even though the main focus in this part of the programme would be on intensity. Training sessions would accordingly be much shorter to accommodate this.

As the capacity of the rider increases, the training load should increase gradually in order to see continued improvements. Again it’s a case of common sense but a lot of riders struggle to come to terms with it. In plain English, build your training gradually. Whether it’s time, frequency or intensity you’re progressing, do it over the long term and improvements will be more sustainable. Don’t suddenly jump from a two hour endurance ride to a five hour endurance ride. You might well be able to complete the ride, but chances are you’d feel like death warmed up and again you risk premature fatigue as well as potential injury or illness due to the sudden increase in training load. Be patient and build up to it. Do three hours, then four, then five. If you’re inexperienced, even 20- or 30-minute progressions might be advisable.

Likewise, if you’re progressing your intensity using a power meter, you don’t want to suddenly jump from averaging 250W for a particular interval to 300W. Make the progressions gradual and over time the improvements will be sustainable.

We’ll finish with one interesting point. You’ve probably realized by now that given the need to overload and progress your training in order to see improvements, every time you get performance adaptations you have to constantly make things harder and challenge yourself more to keep improving, so by definition training never, ever gets any easier. This is correct, if you’re training properly and following the principles of conditioning, your training never gets any easier. You just get better, and that’s what you’re doing it for… training for results.

Next week, we’ll look at a couple more of the principles of conditioning: recovery and reversibility.

Huw Williams is a British Cycling Level 3 road and time trial coach. He has raced on and off road all over the world and completed all the major European sportives. He has written training and fitness articles for a wide number of UK and international cycling publications and websites and as head of La Fuga Performance, coaches a number of riders from enthusiastic novices to national standard racers.

Raleigh-GAC team manager on ambition, realism, and the importance of being open