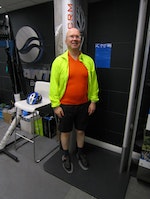 Frank is a cycling fan; he covered last year’s Ghent Six for RCUK and, having lived in Belgium, is an avid follower of the sport. He is also a keen cyclist, albeit one who has less time to ride his bike than he might like.

That doesn’t stop him dreaming of great feats, however, and this summer he intends to achieve one. In a moment of madness brought on, apparently, by excessive consumption of one of those Belgian beers that rivals a good claret for alcoholic strength, he found himself signed up for an ascent of Mont Ventoux sometime in late June (exact date to depend on fitness) to be undertaken in the company of several like-minded friends.

This series will follow his progress; it starts with a visit to the Giant store in Bromley for a fitting. Why Giant? Perusal of the company’s catalogue prompted the thought that the Defy Composite 2, with its SRAM Apex groupset and extra-low gearing, would make the perfect mount.

Giant stores use Germany’s CRM Body Scanning system to assess bodily dimensions and find the correct  size cycle. The system uses a light beam shone at specific points on the body to determine with great precision such details as overall height, trunk length, arm length and even leg length. The resulting measurements produce a figure that, provided the subject lies within the range of body sizes catered for, will correspond most closely with one size of those offered in Giant’s range.

Prior to measurement, Giant Bromley’s Cedric reckoned on a size Small Defy 2. When the machine produced its decision, size Small it was – to within 2mm. Note that Frank is not yet a fully-fledged MAMIL. He has yet to adopt Lycra. That will come soon.

Preparation and choosing which events to ride

Preparation and choosing which events to ride

RCUKClassics - Matt Brammeier on life with a Belgian 'super team'

RCUKClassics - Matt Brammeier on life with a Belgian 'super team'