From October to February each year a convoy of campervans carrying riders, bikes, mechanics and team staff criss-crosses the roads of Europe throughout the professional cyclo-cross season.

Three main competitions make-up the ‘cross season: the World Cup, Superprestige and GvA Trophy. It’s a packed calendar, with 24 races (eight races in each of the three season-long competitions) jammed into four months of racing.

The size of a rider’s campervan(s) within the travelling circus depends on their prestige. Some roll up in a small van with bikes carefully squeezed into the back and a sole mechanic in tow, while others, like Belgian national champion Sven Nys, have a complete fleet of vehicles and a host of staff at their service.

On race day the campervans roll up to the race course. Bikes and wheels are unpacked, mechanics prepare the machines for action, riders warm up and sign autographs and fans coo over the heroes before them.

We pitched up to the second round of the Superprestige season in Zonhoven, having ridden the course 24 hours previous, to take a look.

Enough wheels for you?

A professional cyclo-cross rider typically has three bikes for race-day. Riders can change bikes mid-race and, while one bike is getting clogged up with mud or sand on the track, team mechanics clean and repair the spares

Sven Nys even has his own mobile shop…

…and there’s no shortage of fans ready to show their support for Nys, who is considered the finest cyclo-cross rider of his generation 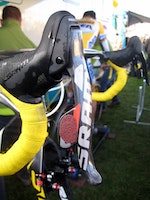 The field begins to empty of campervans as the sun sets over Zonhoven. Onto the next stop on the annual cyclo-cross roadshow…

RCUK's Christmas Gift Guide: when money is no object

RCUK's Christmas Gift Guide: when money is no object

Tell us why track racing is so darned exciting