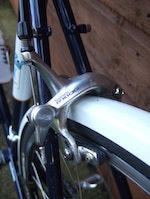 Winter; rain, mud, mudguards, rough roads, fatter tyres… Put them all together and you may find that the mud, softened by rainwater, collects under your mudguards and rubs on the fatter tyres you fitted for comfort and grip on the rough roads you find yourself riding in the off-season.

If so, it’s because there’s not enough clearance between tyre and ‘guard. Or between tyre and fork crown if it happens and you don’t ride with mudguards. It’s a big enough problem for the pros riding Paris-Roubaix to encourage some to race with cyclo-cross-style cantilever brakes in search of mud clearance.

Standard dual-pivot road bike calipers offer limited reach, the maximum usually being  49mm between caliper bolt  and brake block centre lines. While just about enough for 23c tyres and mudguards provided the frame and fork are built so that the block shoes must be placed at the ends of the caliper arm slots, standard calipers don’t offer sufficient room for mudguards and fatter tyres. About the only drawback of my Roberts P-B-P Special was the limited tyre clearance afforded by the standard calipers I rashly chose when specifying the bike.

The alternative would have been to go for one of the several versions of Shimano’s long-reach dual-pivot caliper. The maximum reach of 57mm is a significant increase over standard and allows the rub-free fitment of 25c or even 28c tyres with conventional full mudguards.

There is a small increase in weight – some 50g per pair – thanks to the extra metal in the longer arms. Feel and power, however, are the equal of the comparable standard caliper as the pull ratio – the distance the blocks travel for a given cable pull at the lever – is preserved by increasing the dimensions of the entire caliper in proportion. Indeed, fit a long-reach caliper with the blocks at the top of their slots and power is greatly enhanced over a standard caliper with the blocks at the top of the slots.

The “comparable standard caliper”? Shimano’s current long-reach caliper range comprises two models, the BR-R650 and BR-R450, which are manufactured to Ultegra and Sora/2200 quality respectively. This means that the finish, bearings, quick-release mechanism and cable adjusters are the same on the standard Ultegra and BR-R650 calipers; the latter is a fine piece of kit in its own right and a fine substitute for the former where necessary. Earlier versions have included an RXS variant along with the BR-R600 model offered to go with the 6600 10-speed Ultegra group.

Which is the case with the UWH; a quick measure-up reveals that it was made for long-reach calipers. Hooray! ‘Cos it could hardly be the ultimate winter hack bike without them.

Time to fit some new brake blocks to my Enigma, but where to start?

David’s tips for facing the winter head on

Time to fit some new brake blocks to my Enigma, but where to start?

David’s tips for facing the winter head on

Impressive winter barrier but at a cost