Since the early days of post-war road racing one brand has stood apart from all others, with more racing pedigree and history than most of them combined and able to bring grown men to their knees like no other. Colnago is that brand, and it began way back in 1954 when Ernesto Colnago began making frames in  Cambiago, Italy.

With that brief Colnago history lesson over, today we turn to the company’s flagship race frame, the stunning C59 Italia. It is an an evolution of the first carbon Colnago, the Concept,  developed in 1986 with the Ferrari F1 team. It’s the most current frame to wear the C- series designation. It’s also the same frame Thomas Voeckler rode while wearing the yellow jersey in this year’s Tour de France.

The C59, four years in development, has a distinctive look in a world where frames are beginning to all look the same. It’s modern yet nicely traditional at the same time, a pleasing balance of conservatively oversized tube profiles and masculine [eh? – ed.] sections.

The C59, handmade in Cambiago, Italy – a fact confirmed to the lucky owner by the sticker on the back of the seat tube – uses custom-made high-modulus carbon tubes and lugs to build the company’s lightest-ever frame. There’s just enough oversizing, with the unmistakeable Colnago signature Master-profile top and down tubes and tapered head tube.

To ensure the frame is adequately stiff  for top level racing, the down tube features an internal I-Beam that runs the length of the tube, with small diameter steel rods, to really boost the stiffness the frame offers with little increase in weight. Further measures to ensure the frame is as stiff as a modern racing frame needs to be are the q-stay rear stays and huge chainstays.

Further details include a semi-integrated tapered head tube, 1.25″ at the bottom and 1.125″ at the top. The clean lines of the frame are further emphasised with the rear brake cable and two gear cables being routed internally. They slot through the lugs and the finish, one of a seamless transition from internal to external, is one of the nicest design approaches I’ve seen.

As already mentioned, it’s a light frame. At 950g it’s certainly not the lightest out there but it’s clearly not weighty.

I have had a love-hate relationship with many of Colnago’s paintjobs over the years (mostly hate) but happily the reserved red and white finish of the C59 I got to ride looked fantastic.

Now normally the specification of a test bike would have a large bearing on the overall verdict, but as Colnago only offer the C59 as a frame, it’s down to the owner, or bike shop, to build the bike to their desired tastes. So our review will be focusing on the frame alone, but it’s worth mentioning the components that came fitted to this test frame. 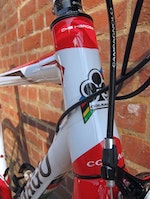 A Campagnolo Record groupset, we’re off to a very good start here, fills most of the transmission points except for the chainset, which has been replaced by an FSA K-Force Light carbon crank. Also diverting from the Campagnolo draw are the FSA brake calipers; which is a shame as the brakes proved flexy and soft. We’d rather have seen the Record brakes fitted. But then I am a fan of complete groupsets over pick and mix.

The FSA Vision tri-max deep section carbon tubular wheels not only looked fantastic out of the box but performance on the road was incredible. Combining a quick spin up from slow speeds with a pleasing directness through the corners, they’re the wheelset for the racers reading this. However, for the purposes of this test I switched to a pair of clincher Fulcrum 1’s for peace of mind out in the lanes of Surrey and Kent.

I’ve ridden many top-end carbon race bikes, but the C59 leaps to the very top of my list of best all time rides. Maybe it’s not at the very top of the pile, but it’s certainly in the top three.

The sizing is a little different with Colnago. This test bike a 52cm which translates roughly to a 54cm traditional. After a few changes, a longer stem, I achieved a satisfactory fit. Out of the clutches of the city and into my usual riding area, I picked a gentle 80km loop, a regular ride into Kent that takes in a few riding hotspots like Toys Hill and Ide Hill, a lumpy ride with some long fast sections that offer a good mix to let the C59 show off. 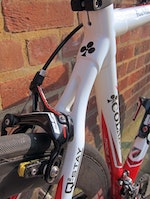 From the first few pedal strokes on the C59, you know you’re on something quite special. The first sensation that feeds back to you is how effortless each pedal stroke feels. The low weight and high stiffness of the frame means it’s a very efficient bike at transferring your energy into momentum.

Lift out of the saddle and lean hard on the hoods and push up a long climb, and it simply sails up. One of my favourite climbs on my usual loop, Toy’s Hill, is a long drag with several ramps and dips. On good form it’s a big chainring climb [you must mean Brasted Chart – nobody rides Toys in the big ring! – ed.], a decent test of fitness. First time up on the C59 and, where I normally find myself shifting down as the effort takes it toll, I found myself flicking up through the gears. Where I normally sag in the saddle under the toll, I was out of the saddle, moving from side to side, revelling in the sheer pleasure of the C59’s climbing grace.

There’s a real sense of direct communication between rider, bicycle and road. The frame is stiff, you can feel exactly what sort of Tarmac you’re riding on, how much grip there is, but it doesn’t pummel your back into a million tiny pieces.

Surprising is just how good the ride comfort is. I didn’t expect it to be as comfortable as it is. Road imperfections are well handled by the frame, with only a reasonable level of vibrations passing through the frame to the saddle. Impressive stuff, Colnago.

The handling is one of the most communicative of any current high-end race frame. But it has a very different feel to the US-based frames that are so popular and dominant these days. The steering is a little more relaxed, less twitchy, which at first can be confused for a slow sensation. But slow is the wrong word. Instead the geometry gifts the bike incredible stability, which you really notice when getting on the gas and shifting along.

Through corners it is simply blistering, carving lines with more control and grace than most other frames. It’s comfortable as a result of this setup too, you get the sense you could just ride it all day long. No wonder they’re so successful in Grand Tours.

Colnago has always had a special draw to road cyclists who are aware of the history of the sport, but the C59 happily doesn’t rest on its laurels.

Colnago, along with many Italian brands, once enjoyed a near unchallenged position as the dominant choice in the exotic race bike market, but the last decade has seen that position seriously threatened with a huge influx from the US, as well as production moving to the Far East driving down prices. The C59 goes a long way towards reversing the situation.

If I had to sum up my review of the C59 with three words, they would be breathtaking, inspiring and stunning. Colnago has an enviable reputation and the C59 only serves to reinforce that.

A truly fantastic frame with impeccable handling and inspiring performance.

Hub flanges and how to measure them

Time to get your sweat on

Hub flanges and how to measure them

Time to get your sweat on