LOOK’s flagship road bike, the 695, has received a new team edition paint job for the Tour de France, not only giving the Cofidis squad a fresh look for the world’s biggest bike race, but also reducing the weight of the bike by 50g.

The LOOK 695 was unveiled ahead of the 2010 Tour de France and the machine is claimed to be one of the most technologically advanced bikes in production. 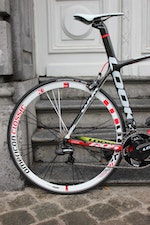 Wheel brand American Classic are making their Tour de France debut at this year’s race. The one-year deal with the French Pro Continental team marks a significant investment for a company which is expected to sell approximately 20,000 wheels in 2012.

The 695 we photographed, provided by LOOK to mark the launch of the new paint job, was fitted with American Classic’s mid-range 420 Aero 3 wheels, while Cofidis are riding hoops from further up the company’s range, including the Carbon 38 Tubulars. Also note the EPost integrated seatpost, which allows for three centimetres of adjustment.

One of the most striking features on the 695 is LOOK’s ZED 2 crankset. The ZED 2 is an evolution of the original ZED crankset, first seen on the 596 time trial bike. The ZED 2 – crank arms, axle and spider – is made from a single piece of carbon fibre. The monocoque crankset threads through the huge BB65 bottom bracket, rather than having two parts which are bolted together, which LOOK say delivers the best stiffness-to-weight ratio available.

It’s only available in one size to reduce production costs and help dealers, but inserts at the end of the crankarms, allowing adjustment of the size to 170mm, 172.5mm and 175mm. Unlike the original ZED crankset, the ZED 2 is compatible with any pedal system.

The LOOK 695 is home to a host of proprietary parts, such as the aforementioned ZED 2 crankset and EPost integrated seat post, and, pictured above, the CStem. The CStem was designed especially for the 695 and can be angled from -9˚ to +13˚, removing the need for a stack of spacers and apparently increasing front end stiffness as a result, while the reach can also be adjusted by 10mm.

The 695 allows for internal Di2 cable routing, while the battery is housed on the downtube below the bottle cage bosses.

And the winners are...

Sagan second, but Evans slips from sixth to 23rd

And the winners are...

Sagan second, but Evans slips from sixth to 23rd

Brits at the Tour: Malcolm Elliott

Brits at the Tour: Malcolm Elliott