We were in Liege ahead of the start of the Tour de France and took the opportunity to photograph Pierre Rolland’s Colnago K-Zero time trial bike – launched in March to replace the Flight as Colnago’s top-end TT machine.

Rolland won the best young rider classification at last year’s Tour thanks to a tenth place finish but, having recovered from injuries sustained in the stage six pile-up, dropped from 16th to 25th in the general classification at this year’s race after losing more than five minutes to Bradley Wiggins on the stage nine individual time trial.

Rolland’s machine (left) lines up next to those of team-mates Christophe Kern and Thomas Voeckler. Rolland recorded a memorable victory on Alpe d’Huez at last year’s Tour de France and the Frenchman’s talents are more suited to climbing than time trialing. The 25-year-old is joint Europcar team leader with Voeckler at the 2012 race. 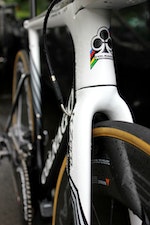 The K-Zero has integrated brakes from TRP, with the front brake tucked behind the fork and the rear below the chainstays and hid­den with an aero­dy­namic cover which Colnago say smooths air­flow along the under­sides of the chainstays.

The K-Zero can run electronic and mechanical groupsets. Rolland’s bike was equipped with Campagnolo’s new EPS time trial shifters; bar-end controls and, pictured above, brake lever shift controls. They were launched earlier this year, at the same time as the TT-specific Bora Ultra chainset, also seen on Rolland’s bike.

Rolland uses Selle Italia’s triathlon-specific Optima saddle, which has a built-in bottle holder. The UCI allows bottles that are positioned behind the saddle as long as they are integrated to the saddle, the seat post or the frame, however the Optima is allowed as it was approved as technical innovation by the UCI in 2009.

The signature of Colnago founder Ernesto Colnago adorns the top of the downtube.