Jonathan Tiernan-Locke signed for Team Sky ahead of the 2013 season and immediately made the Ardennes Classics his target for his first year in the top tier of professional cycling.

The Tour of Britain champion thrives on the type of short, sharp climbs found both on these shores and in the Ardennes.

Having made debut appearances earlier this week in both the Amstel Gold Race and La Fleche Wallonne, the 28-year-old will ride in support of Tour de France runner-up Chris Froome and Columbian Sergio Henao at Liege-Bastogne-Liege on Sunday.

While Team Sky’s riders, including British trio Geraint Thomas, Ian Stannard and Luke Rowe, used the Pinarello DogmaK endurance bike for the cobbled Classics, the Dogma 65.1 Think 2 returns as the squad’s weapon of choice for the Ardennes. The Pinarello Dogma 65.1 Think 2 is made from a 65Ton HM 1K carbon fibre and Pinarello claim the revised layup is “more rigid and more reactive” than that of the Dogma 2 – but Pinarello’s trademark asymmetric design and wavy fork, seatstays and chainstays remain 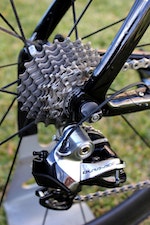 His 53-39t chainrings, however, come from the previous incarnation of Shimano’s top-level groupset, while the cranks are from the edition before that. An SRM power meter provides the all-important data

Tiernan-Locke runs a 120mm PRO Vibe 7S stem and has recently switched from the handlebar from the same range to a carbon fibre PRO Vibe ‘bar. Otherwise, the Devon-born rider sits on a Fizik Arione CX saddle and his Shimano C50 wheels are wrapped in Veloflex Carbon tubs

The frame’s convertible internal cable routing means you can run either a mechanical or electronic groupset, although all Team Sky riders opt for the latter

Stefano Sirotti images from the road to Vajont

Navardauskas wins stage 11 of the 2013 Giro d'Italia, Wiggins in bunch