The British company has a fine reputation for building really nice high-end bikes with unique design features and great attention to detail, and this shines through in the cyclo-cross bikes the company showed us recently at its 2012 launch in Cannock Chase.

Named the Saxon Cross, Kings Cross and Charing Cross, the three bikes share a 6061 hydroformed frame with the notable feature across the board being slacker than normal 69.3° head angle, gifting the bikes an increased stability and less twitchy handling than typical ‘cross bikes.

Prices start from £799 for the Kings Cross and tops out at £1299 for the Saxon Cross, and each bike is well specced with cable disc brakes throughout. 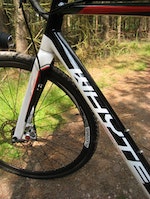 At the top is the Saxon Cross, designed with racing in mind and so it’s good to see there’s absolutely acres of mud clearance around the sculpted chainstays and curving seatstays, with the lack of brake bridge further enhancing clearance. There’s similar high levels of clearance with the fat bladed carbon fork.

Each model boasts a new FSA 386 bottom bracket for maximum stiffness allowing for a wider downtube to be used, and there’s a tapered headtube up front. All cables are routed along the top of the top tube.

Both the Kings Cross and Charing Cross have added versatility: mounts for mudguards and racks making them ideal for touring that involves rugged riding terrain or for the daily commute to the office.

Based on our limited test ride we came away impressed. We weren’t sure what to expect with the handling, but found it far more stable and less nervous than other cyclo-cross bikes we’ve ridden.

The increased stability means it powers over rough trails with way more confidence and ability than we’ve ever experienced on a ‘cross bike. We’re looking forward to testing one more thoroughly this winter.

For more information on cyclo-cross bikes and what to consider when buying one, take a read of our cyclo-cross buyer’s guide.

Hinges notable by their absence

Hinges notable by their absence