We spent Tuesday at the Core Bike Show, a trade only affair at a swanky hotel in Northamptonshire, where some of the top distributors in the cycling industry show of their latest kit – and the star of the show was this De Rosa Protos frameset.

De Rosa’s UK distributor, i-ride.co.uk, sent us some preview shots ahead of the show but now we’ve seen it in the flesh, built up as a full bike. The price? Eye watering. Sure you want to know? Ok, somewhere in the region of £12-13k.

Frame weight is 800g, shaving 150g off the frame used on a De Rosa bike unveiled in 2006 and bearing the same name. The matt black and red highlights make for a stunning finish, with De Rosa’s trademark heart slapped on the downtube. Talking of the downtube, the cross section with the bottom bracket is one of the fattest we’ve seen. That’ll be stiff – and fast. Particularly interesting is the flat fronted fork, which somewhat balks in the face of the aero trend that is sweeping the industry. 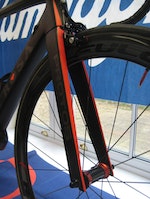 The build on display at Core is about as top-of-the-range you can fathom, with a full Campagnolo EPS groupset – hence the battery hanging somewhat inconspicuously from the downtube – and Fulcrum Racing Speed XLR wheels. It can also be built up with Shimano Di2, with cable routing compatible with the Japanese company’s electronic system, while mechanical Super Record and Dura Ace options are also available.

Flick through the gallery below for a closer look – we’ve also included some studio shots to catch some of the finer details.

Tantalising preview of new flagship frameset; full details to be revealed on January 27