There were plenty of bikes on show at the Core Bike Show, not least the De Rosa Protos super bike we showed you on Wednesday, but also these machines from Lapierre, BMC, Kinesis, De Rosa (again) and Wyndy Milla.

Paraded on the Hotlines stand was this super-slippery Lapierre Aerostorm time trial bike, with a wind cheating design honed in the wind tunnel at the Magny Cours motorsport circuit near Lapierre’s Dijon HQ. It’s got WorldTour pedigree and will be ridden against the clock by the FDJ team this season. The Aerostorm has a tapered headtube, integrated top tube and stem, internal cable routing, adjustable front wheel position and a seatpost adjustable both in length and height. The machine on show is specced with Shimano Dura Ace Di2 and will set you back £7,500, or you can nab the frameset for £3,100.

2011 was the year that Cadel Evans graduated from the nearly man of the Tour de France to champion, overhauling Andy Schleck on the penultimate stage’s individual time trial to move into the yellow jersey. This is the BMC Team Machine SLR01 Evans rode on the final stage into Paris, on display at Core on the Extra UK stand. Ok, it’s not new, we showed you this at Eurobike last year, but Tour de France winners write their name in history, not just for 12 months. Details include a 14cm Easton EA90 stem slammed low, custom painted SRM power unit and matching yellow bar tape and saddle. Even the Easton decals on the deep-section carbon rims have been treated to a dollop of yellow ink.

We brought you a first look at the Kinesis Gran Fondo Ti at last year’s Core Bike Show and now we just had one arrive at RCUK HQ for testing. Here’s the titanium beauty on show on Upgrade Bikes’ stand at this year’s show. The frameset is available for £1,399.99 and a complete bike with Tiagra 10-speed and Reynolds 32c wheels is a penny under £2,000. The ultimate winter bike? We’ll let you know after a spin on our test machine.

If the Gran Fondo Ti is too posh for a winter bike, then the Kinesis Racelight T2 fits the bill. The complete bike pictured retails at £999.99 – perfect for the Cyclescheme – and takes 25mm tyres. The alloy frame is fitted with a carbon fork up front, while Shimano’s Tiagra groupset, Shimano R500 wheels and Kenda Kriterium 25mm tyres complete the look. The frame and fork are available individually for £239.99 and £139.99 respectively.

De Rosa’s Merak frameset has been updated for 2012, with the integrated seatpost making way for a separate aero carbon number. The Merak, which has a chunky BB30 bottom bracket, offers a “very rigid build while at the same time giving a very responsive and stable ride,” according to its Italian manufacturer. De Rosa are distributed in the UK by i-ride.co.uk and the Merak frameset will remove £1,999.99 from your wallet 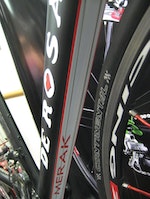 One particularly neat feature of the Merak is the way the cables are tucked inside the silhouette of the downtube, making for smoother air flow. The picture above shows that in action on a Merak frameset built up as a complete bike.

This is the bike of British Premier Calendar squad Team UK Youth, whose rider rosters includes former Paris-Roubaix winner Magnus Backstedt. The Massive Attack frameset is hand built in Italy, while Reynolds RZR wheels and components from Continental, Lezyne, Lizard Skins, Rotor, Selle San Marco, Shimano, Spectra and Speedplay complete the look. The frameset is available to customers in six colours for £2250, while a Team UK Youth bike as pictured above will set you back £10,500.