Genesis used iceBike – the in-house trade show of Madison, the UK’s biggest distributor – to unveil a range of fresh-out-of-the-factory prototypes, including a titanium version of the company’s popular Equilibrium steel steed.

Dom Thomas, the head designer at Genesis, told us the bike was born out of consumer demand for a titanium version of the Equilibrium, which, with its Reynolds 725 steel tubing, is a Sunday club run and long-distance dream machine. Dom’s vision is set around creating an all-season bike, but one which he believes will thrives on rides like the Tour of Flanders sportive. 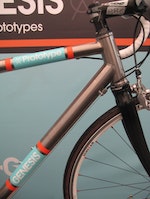 The Equilibrium Ti shares the original bike’s geometry, with a fat custom drawn 3Al/2.5v tubeset. Dom’s design is based around creating a stiff front end, balanced out with a compliant rear thanks to the flattened chainstays and ovalised seatstays. It’s also interesting to note the XX44 headtube, borrowed from the mountain bike world and which is compatible with any headset standard, with the Equilibrium Ti taking a tapered steerer.

The Equilibrium Ti can also take full mudguards, putting it in direct competition with the Kinesis Gran Fondo Ti currently on test at RCUK. Price? Somewhere around £1500 for the frameset, while a Shimano 105-equipped build will be available for £2200-2300.

Next up is the Volant, which replaces the discontinued Aether. It’s an entry-level race bike based around a triple-butted 6069 aluminium frameset. Again there’s a XX44 head tube which will take either a straight or tapered steerer, while three out-of-the-box builds will be available – Shimano 2300 for around £650, £800 with Sora and about a grand 10-speed Tiagra

So we’ve had titanium and aluminium and the Fugio joins the party as a steel cyclo-cross machine. The Reynolds 853 tubeset is built around an aggressive, racy geometry, with a short headtube and no rack or mudguard eyelets. A carbon fork from Whisky, an American company, completes the frameset, which will be available for £800, with a complete bike disc-equipped machine with Shimano 105 costing £1,700.

One of the perks of being a bike designer is having your own embroidered saddle. You going to putting in plenty of miles testing your creations so you might as well do it in style, right?

While we’re talking cyclo-cross bikes, this is a prototype from Saracen. Their roots are firmly in the knobbly tyred world so this is a ‘cross machine for mountain bikers. It partly came about because riders from the Madison/Saracen downhill team wanted something a little nippier for their winter training. As a result, the bike has a similar sloping geometry to many of Saracen’s race-bred bikes, plus there’s a super-short stem up front. Two builds will be available, according to Saracen’s Simon Wild, one coming in under the £1,000 mark and the other with a “dream spec”, based around a high-end Shimano or Sram groupset. This bike’s a rough-and-ready ‘crosser for mountain bikers but there’s also mudguard eyelets to make it suitable for commuting.

Designer on the Super Acciaio: "We realised straight away this was something no one else was doing."

Designer on the Super Acciaio: "We realised straight away this was something no one else was doing."