Great Britain ended the Glasgow round of the UCI Track World Cup with six medals – three gold, two silver, one bronze – after three days of thrills and spills at the Sir Chris Hoy Velodrome.

The women’s squad led the medal charge, spearheaded by double Olympic champion Laura Trott, who reigned supreme in the team pursuit with Dani King and Elinor Barker, before triumphing in the omnium – the two events in which she claimed gold at London 2012.

But a number of crashes beset the Great Britain team over the course of the weekend, the most spectacular being the men’s team pursuit pile-up on Friday.

Here’s how the action unfolded.

Clancy, making his team sprint debut having switched from the team pursuit, rode to silver on the final lap

He may not have been racing, but Sir Chris Hoy was still the star of the show at the velodrome which bares his name 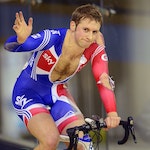 Jason Kenny was left with serious road rash after crashing on the final lap of the men’s keirin final. The triple Olympic gold medallist later withdrew from the individual sprint

Germany finished the weekend at the top of the medal table, with six golds and three silvers, with the hosts Great Britain second