The 96th edition of the Tour of Flanders saw the finish moved from Meerbeke to Oudenaarde, with three laps of a closing circuit which included the Oude Kwaaremont and Paterberg Belgian national champion Philippe Gilbert (BMC Racing) has struggled to recapture his 2011 form and finished 75th, four minutes and 43 seconds off the pace

Pozzato on the Molenberg climb; the Italian would later be part of the race’s decisive move

Devolder, who won the race in 2008 and 2009, takes charge of team-mate Mirko Selvaggi’s machine

Pozzato, Ballan and Boonen went clear on the final ascent of the Oude Kwaremont

Boonen edges out Pozzato in a sprint finish, but Alessandro Ballan did not have the pace to figure in the dash for the line

Boonen is only the fifth rider to win the Tour of Flanders three times, with Fiorenzo Magni, Achiel Buysse, Eric Leman and Johan Museeuw also registering a hat-trick of victories 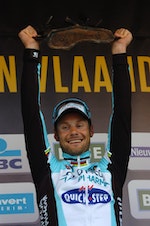 Flecha on Team Sky, the Ronde, and Roubaix

Flecha on Team Sky, the Ronde, and Roubaix

Tour de Romandie stage one: Wiggins displays sprinting skills to make it two in a row for Team Sky

Tour de Romandie stage one: Wiggins displays sprinting skills to make it two in a row for Team Sky