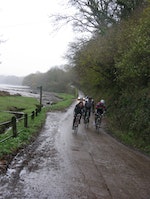 Maybe it would have been different if the day chosen for a preview ride around the route of the forthcoming South Hams Hammer cyclo-sportive had not turned out to be the day one of the worst storms in recent memory hit Britain’s western shores. And if the ride had not taken place in December, when most road cyclists are having a bit of a layoff and 80 miles of ridiculously lumpy going is approximately double what any sensible person would attempt.

But maybe not. The fact is, the route, which climbs some 2600m in just 130km, is going to prove seriously demanding on April Fools’ Day and anyone turning up on the day had better be in pretty good climbing form.

The ride has been dreamt up by members of Cycle Sport South Hams, a local club based in Kingsbridge, as a non-profit-making event organised to raise funds for the Diabetes UK charity, to which 25 percent of entry fees are to be donated.

It promises to be a great day out, with a comprehensively way-marked and marshalled route, electronic timing, two well-stocked feeding stations, mechanical support and first aid, photography by Sportive Photo,  Gold, Silver and Bronze standard awards and an event souvenir T-shirt for all entrants. And online entry…

Naturally enough, the route starts in Kingsbridge at the end of the Promenade, which is where a select bunch of club members greeted your correspondent on a cold, wet, grey and very windy morning for a tour of the South Hams region of south Devon. For those unfamiliar with it, this is the unusually hilly bit south of Dartmoor and stretching roughly from Dartmouth to Ivybridge.

There are several spectacular estuaries, of which that of the river Dart is perhaps the best known. The tops of the bowler hat-profiled hills lie at around 200m, which may not sound much. But, when most of them are not much more than a couple of miles from the coast, there are going to be some steep climbs.

The first of these came after the only lengthy stretch of flat on the entire ride. Neither it nor the steep climb that followed compared to what was to follow as we left the shelter of the Kingsbridge estuary and, propelled by a stiff chuff wind, winched our way up a long, double-top monster before plummeting down to Torcross.

I have to admit that, from this point onwards, my recollection of the ride is a bit hazy. A buffeting wind, treacherous descents and, once away from the coast and into the hills, a complete absence of distinctive landmarks amid the rolling greenery combined with a seemingly endless series of short and very sharp climbs to leave me wondering disconsolately when the first feed was due.

It duly arrived at the top of a long hill that was both steep and draggy and with a stiff headwind for the last kilometre. The feed will be in the premises of Carpenter Oak, outside Totnes. Let’s hope the headwind has died down by April or it will be sorely needed.

By now, the conditions had whittled our group down somewhat, with Will Hornby and Andrew Thompson the only members still keen to press on. Keener than me; as I was being “looked after”, this meant that several opportunities for a shortcut got taken.

None seemed to alleviate the suffering, so, presented at the top of a particularly savage climb that went straight up the side of a hill for a good mile with a sign saying “Kingsbridge 2”, I made an executive decision. A warm shower and some lunch looked infinitely preferable to shipping more punishment of the sort that the South Hams Hammer will be doling out on 1st April.

Sorry, guys; your event is a bit too hard for December. Luckily, there will be two broom wagons out on the day in case it proves too much for many entrants in April. The South Hams Hammer is going to be one meaty ride and a great addition to the UK cyclosportive calendar.

New champion aiming to finish season 'on a high'

Wall-to-wall sunshine and plenty of time in the saddle

New champion aiming to finish season 'on a high'

Wall-to-wall sunshine and plenty of time in the saddle

Preview: 2012 National Cyclo-Cross Championships set to be a classic

Four former champions to battle for men's title; defending women's champion could be sidelined by illness

Preview: 2012 National Cyclo-Cross Championships set to be a classic