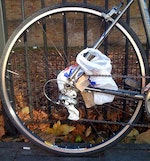 It is the curse of windy weather. You notice it for the first time when it is still some way off; a vague, blobby, insubstantial apparition drifting, apparently, hither and yon. Somehow, as you get closer, its motion becomes more predictable; it is homing in on your own path through time and space.

Then, as you get close enough to be able to identify the commercial outlet advertised on its gaudy flanks, the plastic bag, for that is what it is, takes on a form of motion beyond the predictions of Computational Fluid Dynamics and flies haphazardly upwards before veering wildly off to one side. Finally, it regains its composure and, with a final flourish, rushes back down from the heady heights gained but moments earlier and lands directly between your rear derailleur and the chain.

It is immediately dragged into the transmission, wrapping itself in a Gordian Knot of taut, oil-fouled polythene around the cassette, jockey wheels, spokes and chain. If you are quick and stop pedalling in time, you have escaped with nothing worse than a short stop to remove it and filthy hands. Fail to stop pedalling in time and the result can be calamitous. Take care out there…

Serious training starts for the imminent Tour Down Under

Cavendish joins select band of recipients after a fantastic year

Serious training starts for the imminent Tour Down Under

Cavendish joins select band of recipients after a fantastic year