Chris Froome once again stood atop the Tour de France podium on Sunday having secured a third title in four years – and Team Sky also topped another ‘classification’ having finished the race with the most prize money.

Ahead of the start of the Tour de France, we dissected the €2,295,850 prize pot at stake and Team Sky left the 2016 edition of the race with €599,240 to take the largest share. That’s unsurprising given that figure includes Chris Froome’s €500,000 bounty for winning the race.

The rest of the prize money podium also mirrors the general classification podium, with Romain Bardet’s Ag2r La Mondiale team second with €247,140 (boosted by the Frenchman’s €200,000 prize as runner-up) and Nairo Quintana’s Movistar squad third with €229,350 (including the Colombian’s €100,000 prize money for finishing third overall). Movistar’s prize fund was also boosted by victory in the team classification, worth €50,000. 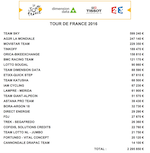 In fact, the prize money ranking acts as an interesting measure of a team’s visibility and success through the race, beyond the final general classification.

Roman Kreuziger, for example, was Tinkoff’s top finisher in tenth overall but his Tinkoff team, netted €189,470 in prize money (fourth highest), thanks also in part to Peter Sagan and Rafal Majka winning the points and King of the Mountains classifications respectively, both worth €25,000 in final prize money.

€300 is also awarded for each day in the green and polka dot jerseys – 15 for Sagan and eight for Majka. Sagan also claimed three stages, worth €11,000 a pop, and both Sagan and Majka won the combativity price once each, adding another €2,000 apiece to the kitty. Sagan also won the €20,000 ‘super combatif’ prize awarded to the rider deemed most aggressive through the entire race and, remarkably, secured ten top ten finishes in all (prize money is awarded down to 20th on each stage).

Cannondale-Drapac, on the other hand, left the race with just €14,100 to split between the team, after a race which saw the squad register just three top ten stage finishes – Pierre Rolland and Tom-Jelte Slagter on stage 15, and Ramūnas Navardauskas on stage 21 – as well as a handful of intermediate sprint and King of the Mountains placings. Slim pickings for three weeks work.

Speaking of which, prize money is available throughout the race, from the first three riders over a categorised climb (€800 for the first rider tor each the summit of a hors categorie climb) to the €1,000 awarded to every finisher from 20th down. You can find our full rundown of the prize money available at the Tour here.

Prize money is typically split between all members of the team, from riders to support staff, though each squad has its own formula as to how the kitty is split.

What the Tour’s prize money ranking does illustrate is the relatively small financial rewards available from cycling’s greatest race, compared to the £10.85 million (approximately €12,958,937) on offer in the men’s singles draw at Wimbledon alone, and the reliance by teams on sponsorship. The big money – for some riders, at least – comes through their salaries, with Sagan reportedly on €4.5 million a year with Tinkoff.