We popped down to distributors i-ride in beautiful East Sussex, in the shadow of Ditchling Beacon, last week to get a first look at some 2012 products from its portfolio of brands.

They look after some of the nicest brands in the business, including Merckx, Northwave, 3T, De Rosa, and many many more. For today here’s a highlights of just a few of the hot products that caught our eye as we wondered around the showroom.

This is Northwave’s lightest ever shoe, the £249.99 Extreme Tech 3V. It’s claimed to be the lightest shoe in the world – weight is just 198g – and holding it in our hands it certainly feels it. A seamless upper is paired with a super thin carbon sole and three simple Velcro straps.

Here is the Extreme Tech SBS, which is essentially identical to the Tech 3V but crucially uses a unique closure mechanism system. Dubbed the Speed Lace Winch System, it uses a cord that is the strongest in the business and is tightened with a small turn wheel. It’s more ergonomic than other rotary systems and should be easier to adjust on the move.

Both shoes feature a first for Speedplay users, a new lighter and lower profile cleat plate attaches to three new slots on the carbon sole. Benefits are reduced weight but more important than that is the lower stack height the system offers. 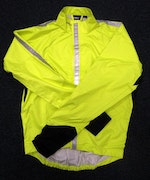 We don’t want to admit it, but the nights are drawing in and that means that the seasons must be changing soon. Luckily Agu has it’s impressive Secco Pro jacket ready for just such occasions.

Its unique feature is a full Velcro front, so you can rip it off in a hurry, and it’s lighter than a zipper so it’ll fold down small and lighter into a jersey pocket. There’s huge reflective panels all over, and neatest of all is the clear plastic viewing panel so you can see your watch/heart rate monitor when you’ve got the jacket on.

For those who take their nutrition seriously, Zipvit has added several new products for 2012, including OptiBurner to increase fat burning (claimed you can burn an extra 300 calories a day) and Sports Multivitamins.

They’ve also improved their gels, making the consistency a little less gloopy. There’s now a range of energy drink and recovery powders in large plastic bags, which are cheaper than tubs and also take up less space so they’re perfect for the travelling cyclist.

A new paintjob for De Rosa’s stunning ready-to-race top-end carbon frame, with integrated seatmast and chuffing massive chainstays. It also features interestingly routed cables, they’re routed through the head tube and pop out the other side and run down ‘channel’s underneath the downtube.

At the other end of the price spectrum, this Milanio from De Rose caught our eye. Complete bike as pictured for under two grand, with a beautifully built and welded aluminium frame – the welds are some of the smoothest we’ve ever seen. 3T now offer its Team Ergonova handlebar and stem in a stealth black colour, alongside the previous red. The mid-level handlebars are made from carbon fibre and weigh just 196g, and cost a smidgen over £200. Very nice, they’ll look lovely on the Parlee, don’t you think?

2011 saw some big releases from Merckx so next year it’s a case of a few refinements and tweaks. The EMX-3 now gets internal cable routing.

More from the rest of the hot products we saw soon…