Garmin-Sharp riders are able to pull one of two machines from the mechanics truck ahead of a day’s racing: the aero Cervélo S5, or this, the super-light Cervélo R5.

This machine belongs to Garmin-Sharp fast man Tyler Farrar, who is as likely to be found on the R5 as he is the S5. We spotted Farrar’s bike in Majorca and took the opportunity to wheel it away for closer inspection.

The R5 is based around Cervélo’s Squoval tube profiles. Squoval? The tube profiles are a blend of square and oval – see what they did there? – which, according to Cervélo, allows them to lose weight without sacrificing stiffness. That helps keep the frame weight down to approximately 750g – which is very, very light.

The R-series set the benchmark of what we have come to expect from a modern carbon fibre frame, with chainstays beefy enough to handle the power of a rider like Farrar and pencil-thin seatstays – Cervélo call them Ultra Thin Seat Stays – to build in plenty of comfort while, usefully enough, saving a little more weight.

Up front, Cervélo have opted for a headtube with a 1-3/8in lower bearing as their engineers believe the 1-1/8 to 1-1/2in standard adopted on many high-end frames is, in fact, too stiff. “Larger lower head tube dimensions offer an improvement in stiffness and handling,” say Cervélo. “However, it is not as simple as ‘bigger is always better’.” They say their 1-3/8″ steerer tube is stiff enough for pin-sharp handling without being uncomfortable.

Farrar broke his Tour de France duck in 2011, winning the bunch sprint on stage three having also formed part of Garmin’s victorious team time trial line-up the day before. The 28-year-old has been plagued by bad luck since then but hopes to return to his best form in 2013

The 3T Integra Ltd stem has an integrated Garmin mount to improve security, aerodynamics and, according to 3T at least, appearance when using a Garmin computer. Needless to say, all Garmin-Sharp riders use Garmin computers (with Farrar’s machine pictured with the Edge 500) but only Farrar and Christian Vande Velde use the Integra stem

Garmin-Sharp are unique in that they buy their components to avoid being tied in to a sponsorship deal which dictates what equipment they use. Therefore, the team’s bike are equipped with Rotor chainsets, rather than Shimano Dura-Ace. Rotor are famous for their non-round Q-Rings but Farrar uses the Spanish firm’s NoQ round chainrings with Rotor 3D+ aluminium cranks and an SRM Powermeter

Garmin’s long-awaited power measuring Vector pedals are yet to see the light of day, but Farrar still uses the pedals even if they don’t measure power – his SRM Powermeter does that

Farrar’s Cervélo R5 is equipped with 10-speed Shimano Dura-Ace Di2, although he will switch to 11-speed very soon 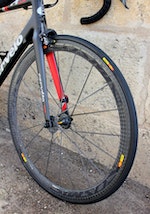 Mavic’s Cosmic Carbone Ultimate wheels have a 40mm-deep profile and weigh just 1,185g for the pair, according to the French firm

Farrar uses an aluminium 3T Ergonova Pro handlebar, which is made from triple-butted AL 7050 and has an egg-shaped profile on the tops

All the action from the Ronde Van Vlaanderen

All the action from the Ronde Van Vlannderen

All the action from the Ronde Van Vlaanderen

All the action from the Ronde Van Vlannderen