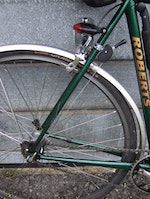 In a recent forum thread concerning the installation of a Sturmey Archer 3-speed hub in a modern frame, forumite phil parker observed; “Of course you’re going to need some sort of braze-on substitute on the RH chainstay for the gear cable.” Readers familiar with the Punisher will be aware that, when originally converting the machine from fixed-wheel to hub gear specification, I cobbled together a selection of cable guides and pulleys in order to get around the fact that the cable arrangement for a hub gear differs from that suited to derailleurs .

Between them, the additional bits did a perfectly satisfactory job of linking the handlebar-mounted trigger shift and its SRAM T3 geared hub, but at some cost; the overall look of the bike, beautifully simple when in “fixed” mode, now looked cluttered with ill-suited bracketry. Nor was the position of the trigger shift, just in front of the handlebar centre bulge, quite as effective as it looked.

A chance conversation with a friend suggested an alternative site for the trigger shift; one that would do away with the various clamps I had so recently fitted while giving a direct line to the hub. I was initially hesitant, given what I imagined would be the inconvenience when shifting caused by the unlikely placement. But I decided to give it a go and rooted around for a sleeve big enough to pack the seat tube out to fit the trigger shifter’s band clamp.

And there the shifter sits, just above the brake bridge on the leading edge of the right-hand seat stay. Now, it would be absurd to claim that the position is dialled for quick and easy shifting. The action required, a grope around under the right thigh, is hardly elegant; nor, given that there’s a rear light mounted in the vicinity, is it “intuitive”, since, as often as not, it’s the light that gets felt instead.

The placing does, however, have the advantage of simplicity, requiring as it does no cable guides whatsoever. Using the shift isn’t excessively awkward, a slight outward angle placing the lever at a comfortable reach. There’s a pleasing lack of excess to the layout, leaving the bike looking as lean as it does with a fixed transmission. And there’s one final benefit; should I wish to whack the fixed wheel back in for a few days, I need only unclip the cable connector and tuck it away under the saddle.

That said, it has to be admitted that using it does look a bit ridiculous.

Extra tyre clearance is a desirable attribute in winter

All-aluminium stem gets the nod

Extra tyre clearance is a desirable attribute in winter

All-aluminium stem gets the nod

Stuff you need to know about… quick release skewers

Cycling life would not be the same without them

Stuff you need to know about… quick release skewers