British cycling has got off to a strong start in 2012, a pivotal year in which all things two-wheeled look set finally to gain the recognition they deserve, and move from the margins to the mainstream.

The next generation of the team’s track stars are performing well in Beijing, Andy Fenn will begin his career at the sport’s top-tier WorldTour level at the Santos Tour Down Under on Sunday (15), and punters are flocking in their thousands to the London Bike Show.

Speaking of which, on our visit yesterday to the show’s opening day, we were privileged to sit down with a true legend of British cycle sport, Malcolm Elliott. A British sprinter able to take on the world’s best and win, Elliott’s palmares include stage victories at the Vuelta a Espana and the Nissan Classic, overall victory in the Milk Race and the Tour of Britain, and a national road race championship. Third in the Amstel Gold Race proved his ability in another of cycling’s biggest races. 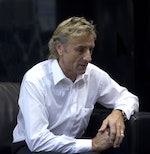 After a six year break, Elliott returned to the sport in 2003, aged 42, to begin a second career that brought him the Premier Calendar title the following year, seeing off many rivals not born when he won his first Premier Calendar 21 years earlier. Last year, he raced for the highly successful Motorpoint squad, but told RoadCyclingUK he would not ride again this year.

“Really, it’s not going to happen. There’s too many obstacles. I’m managing the team and at the end of the day, that’s a full-time job.  Training has had to take a back seat. I still have the desire to train and get to a level. I’ll be going away next week with the guys and I’ll be hopelessly behind,” he said.

Instead, Elliott will put his vast experience at the disposal of Phil Griffiths’ new Node4-Giordana UCI Continental team, guiding the riders through a national and international programme including the Tours of Britain and India, as well as the Tour Series, Premier Calendar races, and UCI EuropeTour events like the Vuelta Castilla y León.

“My priority is to do the best job I can in making this team run smoothly and help the riders make the most of themselves. We’re not trying to race everything, we’re trying to make sure we have a regular programme of international races that fits with our domestic programme. That’s a big challenge.I’ve never set specific targets. We’re looking for a consistent general improvement. The Tour Series is important to us, and the Tour of Britain with its TV presence is something we want to do.

Is 2012 the year cycling becomes truly mainstream in the UK?

I said quite recently that cycling is coming of age. We have to be realistic. Throughout the 1980s with the Kellogs series there was a similar euphoria and optimism. In the 1990s, we trickled along. Now I feel more confident that what I said back in the 1980s, which was based on hope, is now based on substance and has arrived. Various TV companies are making long-term commitments to showing cycling. We haven’t had that before.

He absolutely can. There’s no question over that, even in a longer race with more laps of Box Hill. He will be in the best shape possible to try and win that. Whether he will is down to the many imponderable factors that make up bike racing.

What bridges does cycling still have to cross in 2012?

The general attitude on the roads needs a sea change so that cyclists are seen as a feature and not a hinderance. We need to be seen as equals. The biggest thing to realise is that most cyclists are also motorists. It’s not one or the other. People say cyclists don’t pay road tax, but most cyclists are motorists who may own two cars. It’s a lack of understanding and I would love to get that through to people.

What advice would you give to anyone bitten by the cycling bug in 2012?

Newcomers come to the sport because they discover the freedom the bike can give. The next stage is doing that with like-minded people. Some people might want to ride their brains out, others just because they enjoy it. Some will want to push and test themselves. Ultimately, you should do it because you enjoy it.

Discuss on the forum.