Situated in a back street on the northern edge of Nevers, some 250km south of Paris, the LOOK factory sports one of the most recognisable logos in cycle manufacture. Pedal assembly makes up some 70percent of factory output.  Making up the remainder, frames, forks and ancillary components arrive from Look-owned outside factories to be painted and finished. The Nevers facility also houses LOOK’s r&d and product testing laboratories as well as design studio and, of course, administrative offices.

How many pedals make up this promotional display kept on a wall somewhere inside?

Every LOOK pedal model arranged in order of introduction

LOOK made several pairs of pedals for Alberto Contador to mark his victory in the 2010 Tour de France. Apparently the paint does not last long and the pedals were frequently replaced Developed in collaboration with Polar, LOOK’s Keo Power pedal measures power, cadence and left-right distribution of effort thanks to strain gauges embedded in the pedal axles. 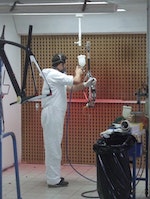 The “monobloc” one-piece carbon-fibre ZED2 crankset weighs 320g and comprises axle, cranks and spider with choice of standard and compact chainring formats and three crank lengths according to the position of an insert in the crank tip 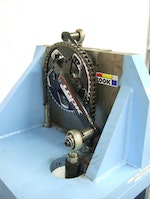 In the test lab, the ZED2 crankset is subjected to 100,000 stress cycles loaded with 180kg to find out how durable it is. Apparently it can take it, no problem; can anyone deal out such punishment?

Your first Sportive – part 5: Get in the Zone

Your first Sportive – part 5: Get in the Zone