The 2013 edition of Milan-San Remo will live long in the memory.

Ice-draped riders were forced off their bikes and on to warm team buses after 117km of racing due to snow on the Passo del Turchino, which resulted in a 55km section of the 298km course being neutralised.

The six breakaway riders were allowed to regain their lead at the restart in Cogeleto, after which the peloton set about reducing the deficit.

With the escapees reeled in, British national champion Ian Stannard (Team Sky) and Sylvain Chavanel (Omega Pharma-QuickStep) attacked on the run-in to the Poggio to leave the peloton behind but Gerald Ciolek (MTN-Qhubeka), Peter Sagan (Cannondale Pro Cycling), Fabian Cancellara (Radioshack-Leopard-Trek) and Luca Paolini (Katusha) bridged across to the duo on the descent of the climb.

And with two of the pre-race favourites, Sagan and Cancellara, closely marking eachother, German fast man Ciolek seized his chance, winning the six-way sprint to claim the biggest win of his career.

Six riders made up the early breakaway, led here by Lotto-Belisol’s Lars Bak

But, with the riders already suffering in freezing weather conditions, the race was neutralised after 117km due to thick snow on the Passo del Turchino

Many riders, including Taylor Phinney, took to Twitter to post pictures of the damage inflicted by the weather 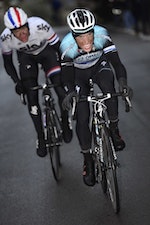 The breakaway was reeled in with 30km remaining, prompting Sylvain Chavanel (Omega Pharma-QuickStep) and British national champion Ian Stannard (Team Sky) to make a brave move of their own on the descent of the Cipressa (Photo credit: OPQS/Tim de Waele)

Stannard led the race over the Poggio but he and Chavanel were eventually joined by a group of four for the final sprint, won by Gerald Ciolek (MTN-Qhubeka) ahead of Peter Sagan (Cannondale Pro Cycling) and Fabian Cancellara (Radioshack-Leopard-Trek)