Ridley unveiled the new-for-2013 Fenix model earlier this year and there is no better test for a Classics-specific machine than the bone-shaking pavé of Paris-Roubaix. This is the machine to be ridden by Lars Bak at this Sunday’s race.

Bike manufacturers are increasingly developing new machines for racing on the rough roads of northern Europe, with Thursday’s launch of the Bianchi Infinto CV another notable example, and the Fenix takes the number of bikes available to the Lotto-Belisol team to four, alongside the super-light Helium SL preferred by Jurgen Van den Broeck, the aero Noah FAST ridden to countless sprint victories by Andre Greipel and the Dean time trial machine.

Greipel also tested the Fenix during the 2012 Classics season and, having been officially launched in February, the frame already has one significant result to its name thanks to Jürgen Roelandts’ third place finish at the Tour of Flanders. Roelandts will lead Lotto-Belisol at Paris-Roubaix but strongman Bak has form of his own, recording a fifth place finish in the 2011 edition of the Hell of the North.

Strength and comfort were top of the design brief when Ridley set about modeling the Fenix and that’s evident in the use of mid-grade 24-ton high-modulus carbon fibre, as opposed to the blend of 60, 40 and 30-ton carbon fibre used on the Helium SL (reviewed here), where stiffness and low weight are paramount. The Fenix frame, on the other hand, weighs a claimed 1,200g – relatively heavy by pro standard.

Otherwise, the sharp-edged tube profiles also help strengthen the frame, while broad fork legs provide a solid platform up front, and flattened sections on the seatstays also help add some comfort, according to Ridley.

The use of that mid-grade carbon fibre ensures the Ridley Fenix is among the most affordable machines in the peloton and the Belgian brand have unveiled a consumer model, the Fenix Classic, using the same frame and Lotto-Belisol paint job, and equipped with a Campagnolo Chorus groupset, Rotor chainset, Fulcrum Racing 5 wheels, Continental Grand Prix 4 tyres and 4ZA finishing kit for £2,345. In fact, we’ll be testing the Ridley Fenix Classic on RoadCyclingUK this month – so watch out for a review.

But back to Paris-Roubaix and Bak’s Ridley Fenix. Let’s take a closer look at the Dane’s machine, which we snapped earlier this year while embedded in Lotto-Belisol’s pre-season training camp.

The Fenix is made from a mid-range, 24-ton high-modulus carbon fibre, which Ridley say provides the best combination of strength, comfort and affordability

Broad fork legs provide a solid platform up front. Note the cobbles on the paint job – a nod to the Fenix’s intended battleground

Bak, who recorded a top five finish in the 2011 Paris-Roubaix, is part of Lotto-Belisol’s eight-man squad for the 2013 race.

How low can you go? Bak’s aluminium Deda Pista stem is also inverted to help the 33-year-old achieve his desired riding position

Bak sits on a Selle San Marco REGALEe saddle, attached to a carbon fibre Deda SuperZero seatpost. But what’s that mark on the middle of the saddle? 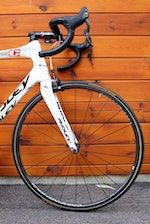 Degenkolb, Goss, and Viviani could challenge the Manx Missile in the race for red

Welshman on the Classics, the Tour, and Team Sky's leadership squabble

Degenkolb, Goss, and Viviani could challenge the Manx Missile in the race for red

Welshman on the Classics, the Tour, and Team Sky's leadership squabble