Mark Cavendish worked with Pro while a HTC-Highroad rider to develop the Manx Missile’s signature stem and handlebars and, sure enough, when the sprinter moved to Team Sky the British squad switched from Deda components to Pro.

Cavendish’s stem takes a battering when he’s locked into a sprint and the huge oversized unit is incredibly stiff. The Star Series Mark Cavendish Carbon Road Stem (to give it its full name) has a uni-directional carbon  fibre construction which Pro say “provides strength and rigidity while keeping weight to a minimum”. Three sizes are available – 105mm, 120mm and 135mm – at £169.99 a prop.

Aluminium is the material of choice for Cavendish’s handlebars (£79.99), which have a 31.8mm diameter across the top of the ‘bar, with four reinforcement spines and dual recessed cable routing. Claimed weight is 290g. 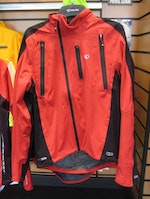 We might only be emerging from this winter, but Pearl Izumi have been busy finalising next winter’s clothing. This is the top-of-the-range jacket from the P.R.O range which will remove £249 from your wallet. It is, however, fully waterproof, and made from a stretchy fabric which Pearl Izumi say is highly breathable, plus there’s chest vents if things are getting a bit sweaty underneath. We particularly like the large rear pocket which has another zip inside, allowing you to access your jersey pockets without taking the jacket off or having to hitch up the rear.

Shimano have made a surprise move into the backpack market, using iceBike to launch a four-strong range. Moving from right to left in the picture above, we’ll start with the Tsukinist. The word’s derived from a combination of tsukin – which means commuting in Japanese – and cyclist so the bag’s designed with the ride to work in mind. As a result it’s packed with commuting-specific features, including a padded laptop compartment, smart phone pocket, an organizer panel, a breathable back panel, plus there’s a rain cover. Two sizes (20L and 30L) will be available when the bags come to market in September, in ash black or lava red and costing £79.99 and £89.99 respectively.

Next up is the Rokko, named after a mountain range in western Japan, although the bag’s the all-rounder in Shimano’s range. “Able to handle weekend rides in the hills as well as weekday jaunts in the city, the Rokko is the ultimate all-rounder,” reads the brochure. It comes in one size (12L), with a tool organizer pocket at the front and a felt-lined valuables pocket to compliment the main compartment. It’s also hydration system compatible if you like your mountain biking, and other features include a light attachment loop, a waist band and plenty of reflective detailing. Like the Tsukinist, it’s comes in ash black or lava red, with a £49.99 price tag.

The final bag in our picture is the Unzen, which is designed specifically with mountain bikers in mind. Most interesting is its unique harness system, which has the straps coming over your shoulders and clipping together across your chest in order to keep your arms free so you’re not restricted when riding over technical terrain. Three colours (ash black, lava red and amber orange) are available, in three sizes – 6L (£74.99), 10L (£84.99) and 15L (£99.99).

The final bag in the range is the Osaka messenger bag, named after the city where Shimano are based. Its quick adjustment system allows you to quickly tighten or loosen the shoulder strap, while there’s a a series or compartments, including a padded laptop section. There are two sizes (25L, £79.99 and 35L, £89.99) and two colours (lava red and shiny magnesium.

We brought you news of the Bell Gage earlier in the week and here it is in the flesh. We don’t want to repeat ourselves but here’s a quick run-down of the key details: it’s Bell’s lightest lid yet at 233g, has 26 vents and costs £159.99. You can read more about the Gage here.